carisma4u / Blog / Nigeria and the Quest for Comprehensive Literacy: The STEM Solution, By Adetola Salau 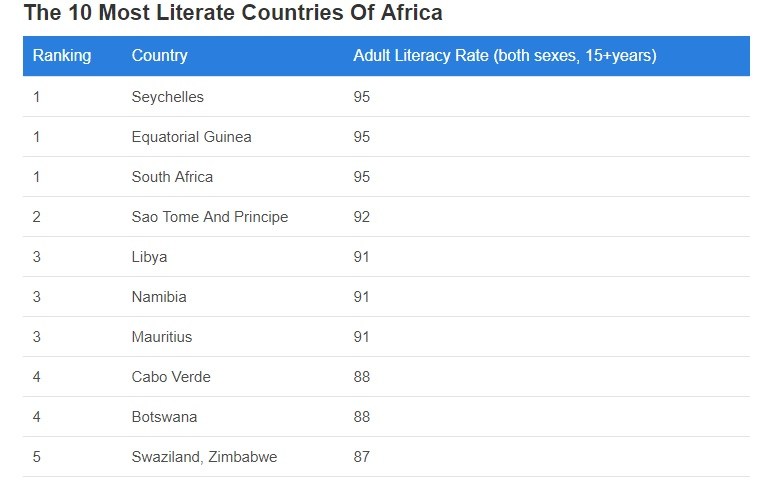 There is a need to increase literacy to accomplish the aim of a holistic education for Nigerian children and adults. Training structures at all levels need to ensure there is always a built-in link between literacy/training and the real world. This is where STEM (Science, Technology, Engineering and Mathematics) education comes in handy.

“Once you learn to read, you will be forever free.” ― Frederick Douglas

In spite of the accelerating rise in literacy rates over the past 50 years, there are still 750 million illiterate adults around the world, most of who are women. This number produced by the UNESCO Institute for Statistics (UIS) is a stark reminder of the work ahead to meet the Sustainable Development Goals (SDGs), especially SDG 4, to ensure that all youth and most adults achieve literacy and numeracy by 2030. The UIS collected data in 2015, from nations across the globe, on people aged 15 or over who can read and write. The results from the data were as follows:

The global literacy rate for all people aged 15 and above is 86.3 per cent. The global literacy rate for all males is 90.0 per cent and for all females is 82.7 per cent. The rate varies throughout the world, with developed nations having 99.2 per cent (2013); South and West Asia, 70.2 per cent (2015) and sub-Saharan Africa at 64.0 per cent (2015). Over 75 per cent of the world’s 781 million illiterate adults are found in South Asia, West Asia and sub-Saharan Africa, and women represent almost two-thirds of all illiterate adults globally.

The literacy rate for Nigeria was collected in 2008 and it was 51.1 per cent for people aged 15 and above.

Literacy is a significant aspect of individual progress which affects social development and is directly correlated to economic health. Having the ability to read and write creates more educational and employment opportunities for the population, allowing people to increase their household incomes and bring their families out of poverty. This has also been tied to increased public health conditions and political activity.

The Most Literate Countries of Africa

Seychelles, Equatorial Guinea and South Africa all hold the first place as the most literate countries in Africa. These nations have a 95 per cent literacy rate each within the population of those over 15 years of age.

The literacy rate in Equatorial Guinea is about 95 per cent for both males and females over 15 years of age. The literacy rate in the country is a lot higher than 98 per cent, when only individuals between the ages of 15 and 24 are considered. This nation has also recently made significant progress toward the Education for All goals, achieving a preschool enrollment of over 70 per cent in 2015.

Sao Tome and Principe has the second highest literacy rate in Africa. In this country, 92 per cent of all individuals over the age of 15 are able to comprehend what they read and write. This percentage reflects a significant increase over the 2008 literacy rate, which was recorded at 69.5 per cent. In 1981, the adult residents of this country reported only a 57.3 per cent literacy rate. Recently, the government has increased educational expenditures and made primary education mandatory, which has had a clear effect on the adult literacy rate reported today.

A strong STEM education — one that results in the skills and mindsets just described, and which opens the door for lifelong learning — starts as early as the preschool, is culturally responsive, employs problem- and inquiry-based approaches, and engages students in hands-on activities that offer opportunities to interact with STEM professionals.

The 91 per cent literacy rate in Libya reflects a significant increase over the previously reported number. In 1969, adult education was made a top priority. The country worked to eliminate illiteracy through several prevention methods like making school mandatory for the youth, and several reactive methods, like opening adult literacy centers in each of the districts of the nation.

The current 91 per cent literacy rate in Namibia reflects great improvement over previous years. For example, this number was at only 89.4 per cent in 2011 and 76.5 per cent in 2007. The improvement is due, in large part, to the success of the National Literacy Program. The government of Namibia increased its educational expenditures and, as of 2013 has been allocating 29 per cent of the federal budget to public education.

Like the previously cited countries, Mauritius also experienced an upturn in its literacy rates, which is currently at 91 per cent. In 1990, literacy there was reported at only 79.9 per cent. In 2000, it was around 84.3 per cent, which at the time, was the highest rate in Africa.

Over three decades ago, the literacy rate in Botswana was under 70 per cent. Today, this country is the fourth most literate in Africa, with 88 per cent of the population over 15 years of age being able to read. This was due to the relentless efforts towards transforming education by the government of Botswana and the success of its National Literacy Program. The program was established in 1977 and it has made significant progress in reaching the adult illiterate population.

A radical upswing recorded by any African nation’s adult literacy rate since the 1970s was recorded by Swaziland. In 1977, this country stated that only 55.3 per cent of its adult population was able to read and write. Presently, that percentage has grown to 87 per cent.

There are lessons here from what a number of African nations did right in changing the educational fortunes of their people: Some established free primary education (and ensured that it truly was free), improved the quality of education, improved childhood education, improved adult literacy by 50 per cent, made sure that there was gender equality in the classroom, and above else increased educational expenditures, especially in the area of public education.

How do we get it right in Nigeria?

There is a need to increase literacy to accomplish the aim of a holistic education for Nigerian children and adults. Training structures at all levels need to ensure there is always a built-in link between literacy/training and the real world. This is where STEM (Science, Technology, Engineering and Mathematics) education comes in handy. In the United States, policy makers and educational leaders have argued that the key to the future prosperity of their country is in improving STEM teaching and learning opportunities for American children (Committee on Prospering in the Global Economy of the 21st Century, 2007). This call-to action is anchored by two distinct realities: that the jobs of the future are integrally STEM driven and the foundation of STEM knowledge that students receive in K-12 has been directly linked to the prosperity of the country.

The 21st century learning and teaching approaches must go beyond the traditional ways of dispensing knowledge and rote memorization, to one where the students take more responsibility for learning and the teacher becomes a facilitator of activities.

STEM (currently termed STEAM: Science, Tech, Engineering, Arts, Mathematics) is a crucial component of a well-rounded education for all students, as it provides access to science, social studies, literature, the arts, physical education and health, and the opportunity to learn an additional language. The process of learning and practicing the STEAM disciplines can instill in students a passion for inquiry and discovery, and fosters skills such as persistence, teamwork, and the application of gained knowledge to new situations. Experts contend that these are the types of growth mindsets and habits that demonstrate one’s capacity for academic tenacity and lifelong learning in a rapidly changing world.

A strong STEM education — one that results in the skills and mindsets just described, and which opens the door for lifelong learning — starts as early as the preschool, is culturally responsive, employs problem- and inquiry-based approaches, and engages students in hands-on activities that offer opportunities to interact with STEM professionals.

Prioritize “lifelong learning” in this new vision for literacy, as it emphasizes the vital role that learning plays in ensuring the acquisition of life skills and qualitative societal revolution in terms of social justice, harmonious living, and economic growth.

What We Need To Make Nigeria More Literate

From research culled from the evaluation different literacy programs across Africa and worldwide, it has been found that effectiveness indicators are due to a mixture of internal and external factors.

A major revision is needed for the definition of literacy itself, which requires to be more inclusive of and responsive to other areas of life, to improve and include a modification to globalization and new challenges. Also:

● Reform of our curriculum, and the newer curriculum should be focused more on African culture and values, with social unity taking a bottom-up approach on the basis of the needs, realities and aspirations of African nations.

● Utilize technologies to leverage on rapid globalization and scaling solutions.

● Emphasize language as a critical aspect in improving the quality of learning, as people learn much easier in their languages of fluency.

● Improve the living and working conditions of educators to stimulate their enthusiasm for the job and prevent brain drain; and also build their capacities.

● Mainstream gender and positive discrimination strategies in support of women and other specific underprivileged groups, especially in rural areas, in the different literacy programs.

● Gear up the public-private partnership with the promotion of different methods and effective private initiatives.

● Encourage politically dedicated governments and better governance of literacy to be led by African heads of state. This could help solve literacy program funding issues.

● Stimulate innovation, as developing and sharing best practices and successful experiences is an important factor.

● Prioritize “lifelong learning” in this new vision for literacy, as it emphasizes the vital role that learning plays in ensuring the acquisition of life skills and qualitative societal revolution in terms of social justice, harmonious living, and economic growth.

She is an Advocate of STEM Education and is Passionate about Education reform. She is an innovative thinker and strives for our society & continent as a whole to reclaim it’s greatness.